Huge product selection. You can contact us if you need certain product

– marbofloxacin, a synthetic bactericidal agent belonging to the fluoroquinolones family that acts by inhibiting DNA gyrase.

– clotrimazole, an anti-fungal agent that belongs to the imidazole family and which acts by causing changes in membrane permeability, allowing intracellular compounds to leak from the cell and thus inhibiting cellular molecular synthesis.

When AURIZON was applied to healthy dog ears, marbofloxacin was absorbed percutaneously resulting in a mean plasma concentration of 0.06 µg/mL on the 14th day of treatment, which is 5.8 times less than the mean minimal plasma concentration observed after 7 days of marbofloxacin oral administration at the therapeutic dose of 2 mg/kg. Clotrimazole was poorly absorbed and was not detectable (<0.04 µg/mL) in the plasma of treated dogs. Dexamethasone mean plasma concentration on the 14th day of treatment was 1.25 ng/mL. In an induced otitis model study, the inflammatory process did not increase the absorption of dexamethasone.

Marbofloxacin is active in vitro against a wide variety of gram-positive and gram-negative bacteria isolated from domestic animals, including the following organisms isolated from infected canine ears: Staphylococcus spp. (including S. intermedius), Pseudomonas aeruginosa, Proteus spp. and Streptococcus spp.

Clotrimazole exhibits a wide spectrum of in vitro antifungal activity, including against the yeast Malassezia pachydermatis frequently isolated from otitic ears in dogs.

The external ear canal should be meticulously cleaned and dried before treatment.

Shake well before use. Avoid the introduction of contamination during use.

After 7 days, a veterinarian should evaluate the necessity to extend the treatment an additional week.

After application, the base of the ear should be massaged briefly and gently to allow the preparation to penetrate to the lower part of the ear canal.

When the product is intended for use in several dogs, use one cannula per dog. 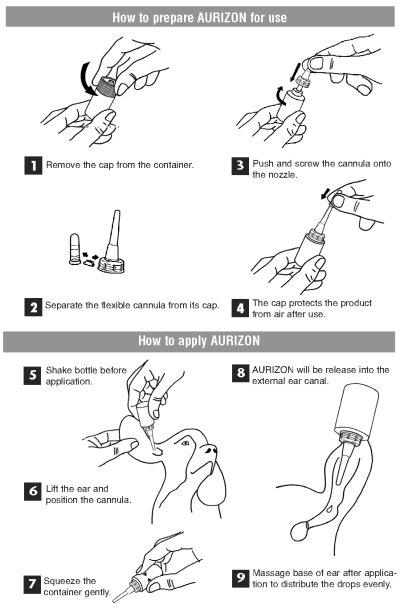 On rare occasions, the use of this product may be associated with deafness or partial hearing loss, mainly in elderly dogs and mostly of transient nature. Localized skin reactions characterized by transient erythema and inflammation at the site of application are rarely reported.

Prolonged and intensive use of topical corticosteroid preparations is known to trigger local and systemic effects, including suppression of adrenal function, clinical signs such as polyuria and polydipsia, thinning of the epidermis and delayed wound healing.

Usual adverse reactions associated with corticosteroid drugs may be observed (changes in biochemical and hematological parameters, such as an increase of alkaline phosphatase, and aminotransferase, some limited neutrophilia and lymphopenia).

Do not use in dogs suffering from perforation of the tympanic membrane.

Do not use in dogs with known hypersensitivity to any of the ingredients.

Do not use in pregnant or lactating bitches and in breeding animals.

Before treating with AURIZON, the integrity of the tympanic membrane must be verified. Treatment must be discontinued if hearing loss or vestibular dysfunction are observed during treatment. Owners should be advised of the potential for adverse reactions (and associated clinical signs) and to contact their veterinarian immediately if any sign of adverse reactions is observed.

Heavy reliance on a single class of antibiotics may result in the induction of resistance in a bacterial population. It is prudent to reserve fluoroquinolones for the treatment of clinical conditions which have responded poorly or are expected to respond poorly, to other classes of antibiotics.

Keep out of reach of children.

Avoid contact with eyes. If splashed in the eye, rinse with copious amounts of water. Wash hands carefully after applying the product.

Persons with known hypersensitivity to compounds in the product should avoid contact with the product.

There are no reviews yet.